On October 17th, to commemorate the 70th anniversary of the founding of the People's Republic of China and the establishment of diplomatic ties between China and Russia, the 6th China-Russia Jiaotong University Presidents Forum sponsored by the Chinese People's Association for Friendship with Foreign Countries and undertaken by Beijing Union University was inaugurated in the Great Hall of the People. Ji Bingxuan, Vice Chairman of the Standing Committee of the National People's Congress, attended the ceremony and delivered a speech. Russian Deputy Prime Minister Maxim Akimov, Federal Council President Matvienko, and Minister of Transport and Communications of the Russian Federation Tietrich sent congratulatory letters respectively. Nearly 300 people including university presidents from more than 60 universities in China and Russia attended the conference, and Vice President of our school Zhang Guochen attended the meeting upon invitation.

Under the theme of Joining Hands for a New Era, Building a Community, the forum discussed how to further promote China-Russia integrated cooperation in the field of transportation. As an important maritime university in the field of maritime transportation, our university was invited to join the Union of Presidents of China-Russia Jiaotong University. At the conference, our school and Admiral Makarov State University of Maritime and Inland Shipping had talks on specific cooperation projects, and signed a framework agreement for cooperation.

Admiral Makarov State University of Maritime and Inland Shipping was founded in 2012 by the merger of St. Petersburg Makarov State Maritime College and St. Petersburg State University of Waterway Transportation, and its history can be traced back to 1876. It is one of Russia's maritime universities with the longest history, the highest academic level and the largest influence at home and abroad. Our School and the University will carry out further cooperation in personnel training, scientific research and other fields. 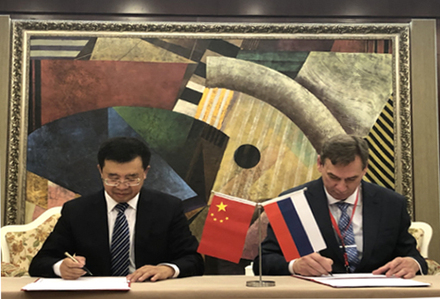